I decided to leave Burlington a day early just for the mere fact that I really can’t stand one place for too long. It may be a disease I have or maybe just the fact that I don’t really know anyone in that town. Either way an adventure was truly neccesary yesterday, even if it only meant a quick hour and a half drive to Hanover, NH.
On the way I made my way into Montpelier to grab some coffee at the local organic cafe and then found the local record shop whose bargain bins I ravaged before I decided to buy an Old Nitzer Ebb album for one dollar. The English Electronic 90s tunes helped me make my way into the small towns of Lebanon and then I continued to Hanover, NH the home of Dartmouth University.
It was dark at 5pm and school just got out for Thanksgiving, so there really wasn’t much to do. I hit the cafe and checked the email and then made my way to the local CoOp. I feel like a hippy just being in a town like this….like if I don’t recycle I won’t be able to make any friends.
Boredom took over, so I splurged and went to the movies. I decided on shop girl, cause I haven’t seen Claire Daines in anything since ‘My so Called Life’ when she only had drama with Jordan Catallano and the stresses of Highschool. That and Jason Schwartzman plays in Phantom Planet, a dope Cali band.
The movies proved to be a great choice, then it was time to scope out somewhere to sleep. The Karhu Truck that they loaned me to drive down is going to be my home for the next few days…I’ll admit that sleeping in your car in the West is much easier. I found place to crash behind the University Graduate school area. Not a bad sleep. Not bad at all. Got a show tonight, so check back tomorrow to see how my wonderful world is going. WORD. 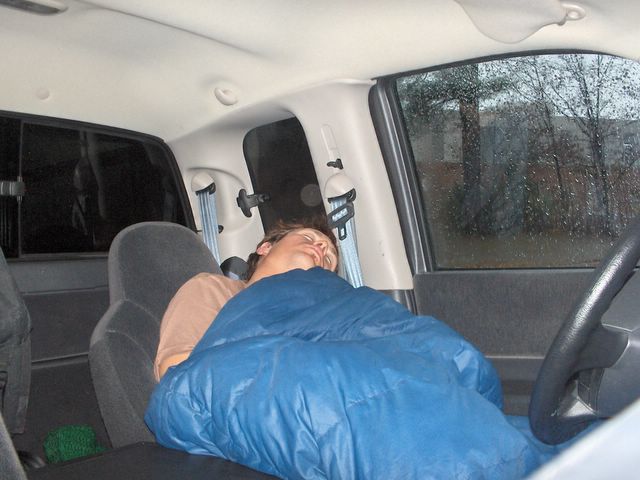 Living the High Life near Dartmouth University. See I didn't need to attend school to make it big!

« Warren Miller’s “Higher Ground”
I Made It To Killington, VT »